As the 2012 Session unfolds the rest of the state seems to be waking up to what cabin and lake home owners have long known; Minnesota's property tax system is irreparably broken and we need a comprehensive reform.

Despite the fact that the 2012 legislature will be dominated by Vikings stadium debate, a bonding bill, a short session, and redistricting, both the Republican leadership and Governor Dayton have signaled that we can expect some change to the tax code this year and a ramp up to a major property tax reform package in 2013. This represents the best opportunity MSRPO has had in over a decade to advance our tax agenda.

The Legislature remains focused on tax reform and will likely pass a tax bill this session in addition to a bonding bill. Last summer as part of the package to end the government shutdown, the Homestead Credit was replaced with the Market Value Exclusion, a move which saved the state about $260 million towards its deficit, but also drew sharp criticism for shifting tax burden onto other classes of property ... raising property taxes about $300 million in 2012.

If you own property in Minnesota, it's likely your property taxes went up even as property values fell: And for those who want to know more, the House Research Fact Sheet.

We can expect some tinkering to this change as part of the 2012 tax bill, but more importantly, criticism of this shift has motivated the Legislature to lay the ground work for a state and local fiscal system overhaul in 2013. One bill in particular deserves support. 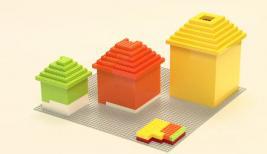 H.F. 1822 authored by Rep. Loon, Rep. Dittrich and Rep. Gottwalt would, if passed, would establish a tax reform action commission because, "The legislature finds that Minnesota's state and local tax system is flawed and not well adapted to the changing nature of the economy and the demographics of the state and must be reformed so that it is:

(3) fair and equitable to all Minnesotans

Minnesota's cabin owners have been the canary in the coal mine. Because we receive no homestead credit, no circuit breaker protection, no taconite credit or any of the other property tax buy downs, we have long known that Minnesota's property tax is unsustainable, that it will ultimately force the sale and subdivision of sensitive shoreline, confiscate heirloom lakeshore properties, and fragment forest land. Other property classes, especially lake homes which have seen dramatic increases of late, are now recognizing the truth that the property tax system is deeply flawed and must be dramatically reformed.

We think significant reform is coming in 2013. The redesign of government and reform of Minnesota's state and local fiscal system is central to job creation and prosperity. Star Tribune: Property Taxes Need Reform, Not Quick Fixes.

MSRPO supports these reform efforts and encourages all members to keep this call for reform front and center for legislators as they move through this session and into the 2013 campaign.

This Ventura-era state property tax was passed in 2001 and applies to all commercial/industrial property and, inexplicably, cabins. A portion of the proceeds were originally slated for an educational reserve account, but the next year the legislature diverted all of the revenue into the state general fund. At present the tax generates over $800 million, with seasonal property paying about $40 million of the burden. Removing this tax would inject $40 million into local economies as owners made long delayed repairs and improvements.

Rep. Keith Downey of Edina has introduced H.F. 2318, which slowly phases out this tax over time until it ignobly expires in 2025. Sen Ortman, Sen. Pederson, Sen. Chamberlain and Sen. Brown have offered there various companion bills in the Senate ending the tax in 2019. Other proposals have been introduced affecting the statewide business tax, some affording cabins relief, while others focus primarily on commercial industrial portion.

MSRPO has long maintained that the state should not be in the property tax business, and has questioned why cabins, as non-income producing properties, would have ever been included on a business tax in the first place. We support the repeal of the State Business Property Tax on cabins.

Governor Dayton has indicated that in 2013 he plans to roll out a major tax reform plan. Any reform must include a major overhaul of our property tax code to more rationally tax shoreline. Current law is not only unfair, but destructive to our lakes and rivers by forcing ever more aggressive division and redevelopment of shoreline as owners struggle with ballooning tax bills.

An assessor on Lake Vermilion once said, "We used to mine iron ore. Now we mine lake shore." The land of Ten Thousand Lakes simply cannot afford to continue to mine its shoreline.