On September 4th, the Lessard-Sams Outdoor Heritage Council (LSOHC), which makes recommendations to the Legislature on how to spend a projected $100 million a year of Legacy funds (raised by a 3/8ths cent statewide sales tax approved by voters in 2008) listened to presentations from more than fifty organizations seeking funding for specific, on the ground projects.

One proposal by the Minnesota Coalition of Lake Associations (MN COLA) garnered the majority of the attention. More than forty supporters of the proposal from around the state,  some driving down from as far as Mille Lacs and Ely, attended.  Special thanks to all of you who turned out in support of this important step forward in the fight to protect Minnesota's lakes and rivers from invasive species.  It was inspiring to see so many people turn out for MN COLA's presentation, a real testament to Minnesota's commitment to our lakes.

In addition, the LSOHC received a packet of over 60 letters of support from counties, and lake associations, representing tens of thousands of citizens from across the state. The Minnesota Statewide Aquatic Invasive Species, (AIS) Advisory Committee, appointed by DNR Commissioner Landwehr in December of 2012 also submitted a letter in support of greater funding of local AIS efforts.

The MN COLA plan would dedicate about $25 million into the Conservation Partners program, administered by the DNR, for local governments, agencies, tribes, counties and even watershed districts to buy capital improvements and establish local AIS inspection facilities and permanent decontamination units across Minnesota. Today, the DNR decontamination units are portable, creating confusion for boaters and access inspectors alike when a contaminated boat is discovered.

Currently the DNR AIS plan stresses personal responsibility and relies heavily on locals to provide volunteers, equipment, literature and staffing.  Most townships, cities and counties lack the budget resources to hire staff, purchase decontamination equipment and implement a robust inspection program.  Currently, entities that sign a delegation agreement with the MN DNR receive little or no state funding or resources in exchange for the liability and expense involved in partnering with the MN DNR in this way. The MN COLA proposal begins to address this gaping hole in Minnesota's AIS programs. 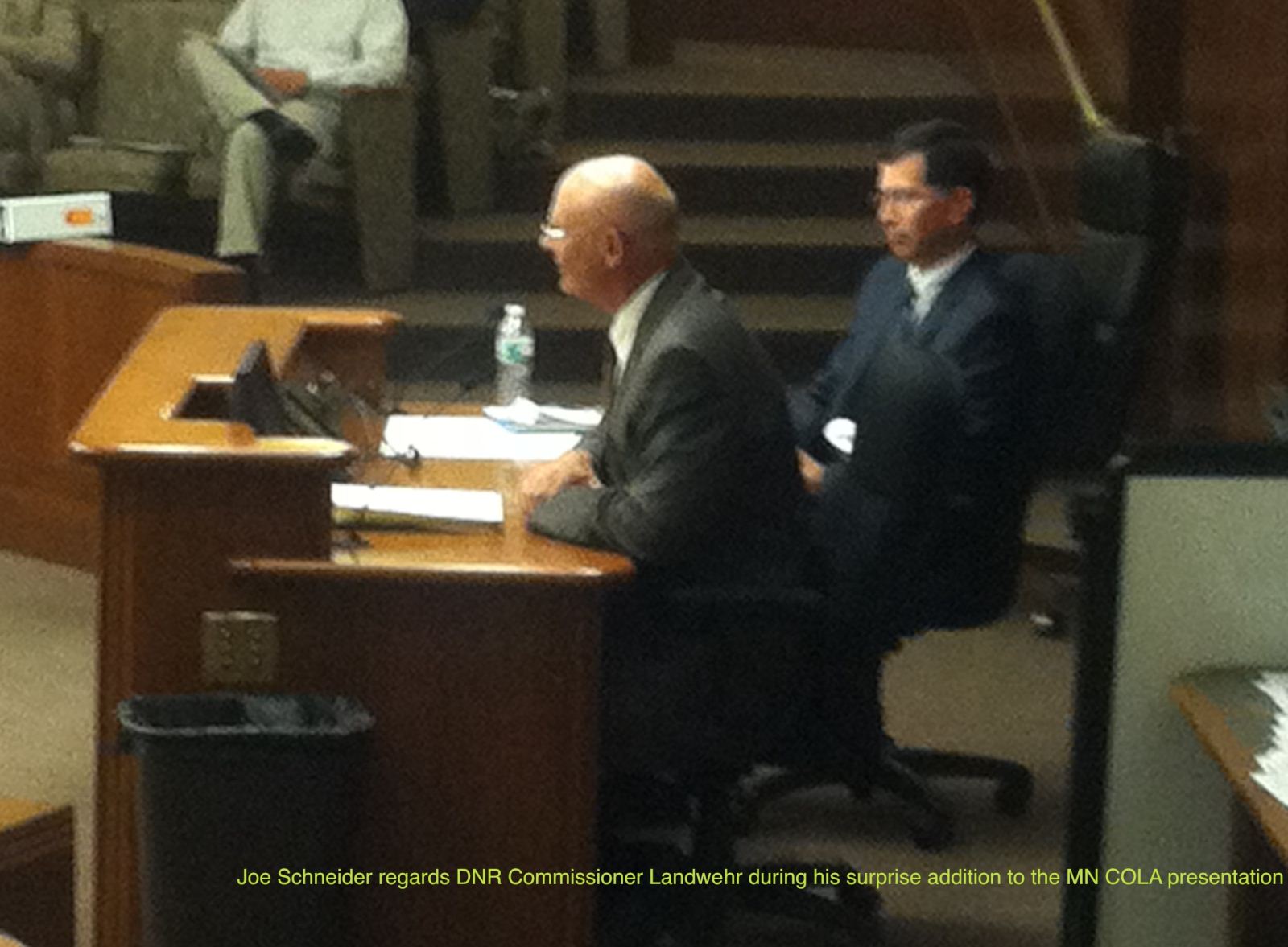 Joe Schneider, Vice President of the MN COLA, presented the plan to the citizen led LSOHC.

While all seemed to agree that aquatic invasive species were a problem, the committee worried that  the   public was not ready for robust local inspection  and decontamination programs.  They also wondered    if using inspection and  decontamination methods would be successful.

Currently the DNR plan for AIS focuses on inspection at local accesses,  relying on that as a large part  of an education program to teach the public about effective AIS Best Management Practices on their  personal watercraft.

In and interesting twist, members of LSOHC suggested that quarantine of the  lakes was  the most  complete and cost effective method of controlling the  spread of zebra mussels, spiny water flea and  other aquatic invasive species.

Joe Schneider pointed out that local programs are the centerpiece of the  current DNR strategy, and that  well organized and adequately funded local  efforts are the best way to maintain open access of  Minnesota's lakes.  "What  we are talking about is jump starting local programs with money for the  basic capital improvements required.  This is not a plan to close the lakes. This is a plan to jump start  local efforts so boaters will not be burdened with long waits, more limited access or confusion as they  try to do the right  thing."

In a surprise move, Council member Ron Schara, host of the local television show MINNESOTA  BOUND, invited DNR Commissioner Tom Landwehr to share his perspective on the grant proposal.  Schara has been publicly critical of local AIS efforts.  Commissioner Landwehr did not support the  program, listing the number of boats in Minnesota  (800,000 registered watercraft), and quoting a study  by the DNR that estimated that inspecting all of  these boats statewide before launch would cost an estimated $500 million a year - a staggering number.  Commissioner Landwehr stated that he did not believe that funding local AIS programs would be a good use of the legacy fund dollars, leaving spectators to wonder if the DNR truly values local partnerships in its AIS program.

By statute, the LSOHC was intended to fund projects that protect fish habitat, among other things.  Rep. Rick Hansen pointed out that this was an area of their mission long neglected, with the majority of the money being spent since 2008 on land acquisition and terrestrial restoration projects.

Minnesotan's overwhelmingly supported the Clean Water, Land and Legacy amendment with their eyes on the health of our lakes.  And for good reason - the book Sportfishing In America, 2011, lays out the value of Minnesota's lakes in terms of fishing related revenue:

According the the University of Minnesota:

Unfortunately, the Council cut off Commissioner Landwehr's testimony, preventing any questions from Council members regarding Commissioner Landwehr's surprising appearance during a presentation by a grant applicant or the Commissioner's unusual comments regarding state funding of a portion of the state's AIS program set up by the DNR.  Rep. Rick Hansen suggested that while the $25.2 million request was a lot of money, the Council should fund a pilot project to determine the efficacy of local inspection and decontamination models.

The LSOHC will continue to meet, and will present a package of recommended proposals to the MN Legislature for appropriation.  The LSOHC does not appropriate money.  By Constitution, the Legislature holds the purse strings in the state.  For the last few years, the LSOHC, along with sportsmens' groups, have lobbied against any change to the LSOHC funding recommendations by the legislature, as evidenced by the controversy surrounding last session when the House and Senate passed a Legacy funding bill with $3 million appropriation for local AIS programs.  All of the LSOHC recommendations were funded, but the LSOHC and supporters bristled at the legislature's addition. After bitter, and at times hysteric cries in the press, Gov Dayton used his line item veto to strike the AIS funding measure from the Legacy Funding bill.  The appropriation was similar to the current MN COLA proposal by making grant funds available to local agencies for Aquatic Invasive Species programs.

Those interested in tracking the Minnesota COLA proposal through the process can tract events at the LSOHC Website.

MLR and MN COLA need your continued support and advocacy for decontamination facilities across the state so as to facilitate responsible boating in Minnesota. Currently the equipment necessary for each boater to be responsible is lacking.  With an upfront investment to "jump start" local efforts, Minnesota can take steps towards building a program worthy of the heritage, beauty, recreation and economy Minnesota's lakes afford all of us.

Again, thank you to each of you who are involved in this work.  The selfless passion of thousands dedicated to preserving Minnesota's lakes is energizing and inspiring. Please keep in touch,