Is Mille Lacs Harbinger of Other MN Walleye Fisheries?

As you all know, yesterday on Monday August 4th at 10:00 P.M. the MN DNR closed walleye fishing on Lake Mille Lacs in and effort to protect the resource.

The impact of the walleye fishery collapse on the resorts and related businesses from restaurants, gas stations, bait shops, and the impact on property values surrounding the lake are devastating. Gov. Mark Dayton is considering holding a special session during which he will ask the Minnesota Legislature to make $20 million in low or no interest loans to help carry the businesses through the year.

Public discussion has focused on MN DNR management through slot limits, predation of zero to two year old walleye by muskies, northern, bass and cormorants; and tribal harvest (in a surprise move the Mille Lacs Band of Ojibwe will forego the remainder of their harvest this year and next in an effort to protect the resource).

What is missing from the discussion is the impacts of zebra mussels, introduced into the lake in 2005, and spiny waterflea in 2009. Both species remove different parts of the base of the food chain, food that young walleye need. The current biomass of walleye is estimated at 2 million pounds, the zebra mussel biomass is estimated at 2 BILLION pounds. The zebra mussels are filtering all of the water in Mille Lacs more than once a day.

The current discussion of $20 million in aid to the area underscores the reality that preventing the spread of aquatic invasive species is far cheaper than coping with the impacts of these invaders after the fact. 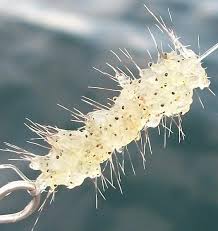 Spiny waterflea, which arrived in 2009, are predators removing another portion of the food chain, zooplankton, creating cascading effects in the aquatic food web (i.e., less food for perch, small walleyes, and other species and species life stages).  If the population and impacts are great enough, research suggests that young walleyes could grow more slowly, which could result in poorer overwinter survival in the first winter of life.

Tom Jones, Mille Lacs DNR researcher, said that he is seeing dramatic declines in zooplankton in Mille Lacs. "It is changing faster than we can detect changes." There has been a rapid decline in walleye numbers from 2010, following spiny waterflea introduction to Mille Lacs. Said Jones, "It makes sense that zebra mussels and spiny waterflea are having an impact - they dynamically alter the food web."

MN Senator Carrie Rudd, whose district includes the northern end of Mille Lacs, was recently quoted in an August 4th MPR story, "... you have to address the zebra mussels."

Mille Lacs was one of the first inland lakes infested with zebra mussels. It was an early victim of spiny waterflea in 2009. It is the only inland lake in Minnesota infested with both. While it is difficult to document a direct cause and effect in a dynamic and complex lake system, there is no doubt that the combination of these two aquatic invasive species are having a significant impact on the current collapse, and that these two species will make any recovery more difficult and less robust.

Dave Orrick, Pioneer Press, details the compound impacts Mille Lacs AIS are having on the walleye population. As this Star Tribune article points out, other walleye lakes like Vermilion are teetering.  Walleye fishing on the west end of the lake is far below historic levels, Vermilion was also designated as infested with spiny waterflea this summer.

This raises the question, is Minnesota ready to bail out each lake that collapses  due to the combined and interacting pressures, including aquatic invasive species? Are we willing to adjust our expectations and live with the negative impacts of zebra mussels, spiny waterflea and other aquatic invasive species, to switch from walleye fishing to bass fishing, muskie fishing or even cat fishing? Are we willing to watch out of state anglers tow boats (and recreation dollars) through the state, bound for areas that took the threat of AIS more seriously than Minnesota has, areas that chose to protect their resource and are able to enjoy the return on those investments.

I think Minnesota is better than that.

MLR members are working across the State to stop the spread of AIS. We were the lead organization supporting the creation of Minnesota's local, annual $10 million County AIS Prevention Aid program, and one of the organizers and sponsors of last year's Aquatic Invaders Summit that brought together over 400 stakeholders from 56 counties to develop a Local AIS Action Framework. MLR and partner MN COLA advocated and pushed for the creation of $4.5 million to fund pilot projects for innovation in stopping the introduction and spread of AIS. Requests for Proposals for that grant program are now open with letters of initial inquiry due September 15th.