In about 2007, I received a call from Ted Johnson, the President of the Lake Washburn Association, LWA about Aquatic Invasive Species. Ted was concerned that Lake Washburn was susceptible to AIS following the construction of a MN DNR water access site.

I could offer little comfort.

This was before MLR had successfully lobbied the legislature to create the annual $10 million in County AIS Prevention Aid, so there were no county AIS programs then. There was almost no watercraft inspection program from the MN DNR, no decontamination services for the public. It was not until 2012 that MLR was able to successfully lobby the Minnesota legislature to establish and fund the creation of the Minnesota Aquatic Invasive Species Research Center, MAISRC through the Environment and Natural Resources Trust Fund.

So there were almost no resources available to lake associations for AIS prevention or management.

Ted and the Lake Washburn Association had to go it alone. The LWA looked at the most likely AIS they would face. They reached out to the private sector to get a quote on what a treatment might cost, and then asked members to contribute to an AIS fund so that they would be able to move quickly when/if an AIS was discovered. They brought in a DNR expert to teach the lake association members how to identify eurasian watermilfoil, curly leaf pondweed and other AIS.

In 2009, one of the LWA members found a fragment of eurasian watermilfoil, EWM on the shore. The MN DNR confirmed the milfoil. The LWA set the goal of eradication, but the MN DNR cautioned them that the best they could hope for was “control” of the invasive species. But LWA was one of the very first to implement an early detection and response program.

Within days Ted had contracted James Johnson at Freshwater Scientific Services to survey the lake and determine the exact location and size of any EWM infestations in the lake.

Johnson found that there was an area of about 4 acres near the public water access where EWM was growing. Ted then contacted Patrick Selter, PLM Land and Lake Management Corp to chemically treat the area. In addition Ted, who had become SCUBA certified, hand pulled the milfoil that had survived the treatment.

In subsequent years, the LWA continued to hire Freshwater Scientific Services to survey the lake and then used a combination of hand pulling and chemical treatment from PLM. Over time the size of the EWM infestation declined. Last year, after an exhaustive survey of Lake Washburn using both a rake and diving, only one EWM plant was discovered. 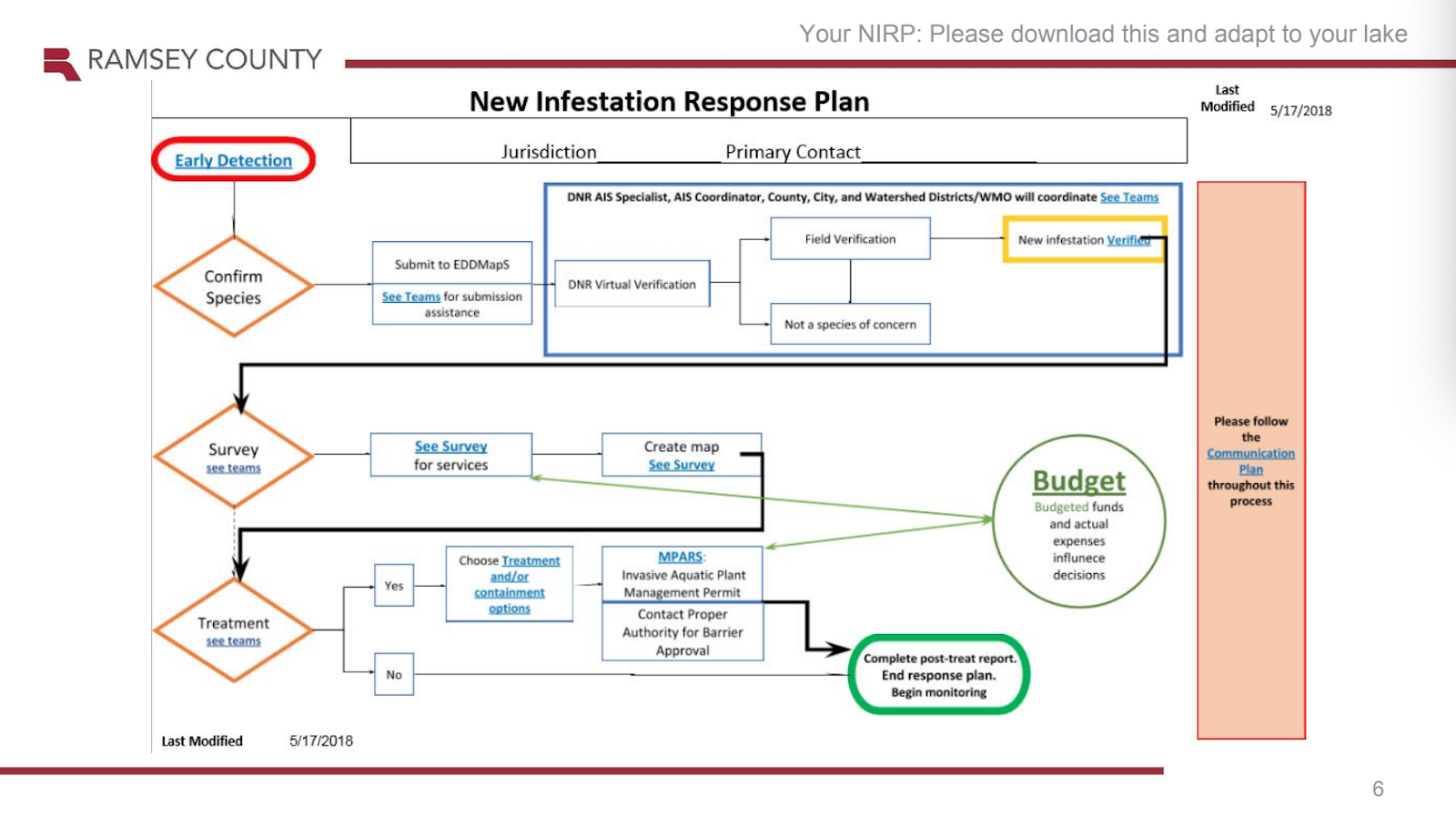 Since then initiating a New Infestation Response Plan has had further success, and shown the strategy to provide a significant Return On Investment, ROI for lake associations. It may be possible to eradicate some AIS if it is discovered early:

As lake associations consider their limited budgets, and investment in early detection can save many tens of thousands of dollars, and countless hours of volunteer time down the road.

Given this Return On Investment and the potential success, the MAISRC launched the AIS Detectors program where volunteers can receive training in identifying AIS. Six years ago MAISRC launched the Starry Trek program to search high risk lakes for starry stonewort.

Lake associations play a critical role in AIS prevention and management. A vigorous early detection effort could be key to the eventual management or even eradication of an AIS infestation.